I did an internship in China and did some traveling while I was there. Traveling around can be quite a challenge…different people, different culture, different environment and more importantly, a different language. You will not find many people speaking English, especially when getting around Chengdu. But this is what makes things even more interesting and puts you outside of your comfort zone. You can learn Chinese that would be useful to you in just a couple of months and not be afraid to speak it out.

I’m going to share with you one of the most amazing experiences I have had so far in China. One of the most beautiful places on Earth is Emei Mountain and Leshan!

The main purpose I had in my mind for doing an internship in China was to learn and discover new things, but sometimes it can get pretty exhausting. And taking into account that as an intern, I only got 2 days off every week, I try to take advantage of this as much as possible and explore my city and its surroundings.

My days off eventually overlapped with two of my Spanish friends that I met in Chengdu so we finally decided to do a little bit of traveling. We didn’t have a lot of information or make a lot of plans. We were spontaneous and adventurous so off we went! Our meeting point was at Xinnanmen Bus Station in Chengdu and from there, we bought the tickets and jumped onto the bus towards Emei Mountain. It takes about 3 hours to get there but we were pretty excited and talked the whole trip. From the bus station in Emei, we took another bus and got to meet some very nice people. Unfortunately, the bus does not go up to where the cable car was so we had a good workout session while climbing the stairs and trying to keep ourselves from falling, since it was quite a lot of snow. It felt so good though! Seeing all the mountains and the snow kind of gave me a homelike feeling. But that was just the beginning!

When we arrived at the top, a nice Chinese guy from Australia took us to see the room where he checked in, so we decided to book the room next door. I have to say, Jinding Mountain Villa is one of the few choices you have at the top of the mountain, but the conditions are quite good. It was freezing cold, but the beds have electric heating system and you can stay quite warm. And they’ve got great showers! Apart from that, it was quite entertaining trying to get our fingers and toes a little warmer by using the hair dryer.

After we checked in, we went out and took a tour of the place. We are lucky enough to have a good view of the sunset.  After that, we went and saw the Golden Summit and then went for dinner in a restaurant nearby the hotel, which surprisingly, had an English menu. Even though it was still early, we decided that we had enough for the day, so we went to the room and tried to get warm. So what better solution than sitting in bed and drinking some hot chocolate? But the interesting part was that we didn’t have any hot chocolate so we went to the shop in the hotel and tried to explain that we wanted to buy some hot chocolate. We didn’t know the Chinese word for hot chocolate, only the word for water, “shui.” The lady at the shop took us to different rooms where they had some sort of hot water machine and then to a shower room thinking that we wanted hot showers. We finally managed to get what we wanted. Trust me, basic things that seem to be normal and easy, are not like that when in China! 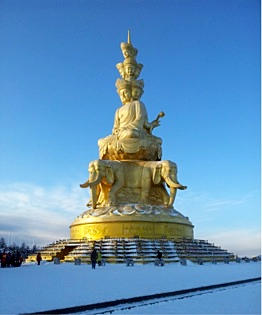 It is said that the best view of the mountain can be at the sunrise so, after a sleepless night we went out at 7 AM and climbed the stairs to get to the top. The place gets really crowded and you just feel the cold running through your bones, but the view definitely was worth the effort! Everyone was in position, waiting for the sun to rise, cameras ready and adjusted, people smiling and trying to bear the cold, couples waiting for the perfect moment to immortalize a special time of their life, girls taking off their coats and wearing just a dress in freezing temperatures for the sake of having a great picture! And when the sun was up, we could feel the warm rays heating up our frozen faces. The atmosphere was incredible! People lighting candles, the golden Buddha statue shining in the sunlight and a really warm feeling on the inside despite the cold temperature from the outside.

Afterwards, we headed back to the hotel and warmed up for a couple of hours and watched Chinese cartoons, which are pretty funny. And then we were back on the road. We took the cable car and then headed to the bus station. We even got to feed the wild mountain monkeys while we hiked the ice and snow ridden mountain. Eventually, we made it and were pretty excited because we didn’t fall. We kept on practicing our Chinese language skills and took pictures with the Chinese people on the bus.

The entry at the Giant Buddha is around 100 CNY and after taking off some of the clothes we were wearing under, we were ready to explore more. It felt like landing on a different planet! 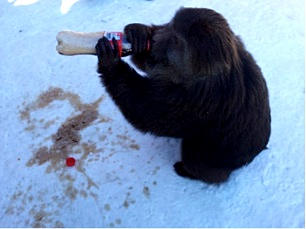 A few hours ago, we were freezing and walking in the snow at the top of the mountain, and now, we were walking around this beautiful place, with so many people around and the great sun shining up in the sky. So we were back to climbing stairs, meeting people, taking pictures and enjoying an amazing day! There was literally no time to feel tired. Before we knew it, we were back at the bus station, on the bus, and on our way back to Chengdy. Funny how we kept saying that “ok, we have had enough, we’re going home now.” It’s actually surprising to see that Chengdu feels like home now, after just 3 months of being here. My internship in China has